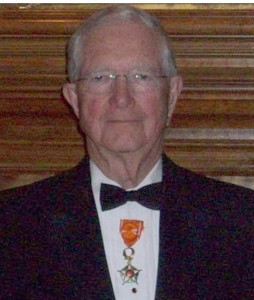 The Kingdom of Morocco

In addition to over 40 years as President of McLear And Company Investment Bankers, Harry has been the Honorary Consul for The Kingdom of Morocco for over 25 years—Appointed by His Majesty Hasssan II on July 9, 1986, approved by the US Secretary of State in 1987. Of all the leadership roles Harry has held, this has been the most rewarding. Since his appointment, Harry has made extended efforts to promote awareness and understanding about Morocco to the people that live in the Midwest and Southwestern United States. He continually meets with businesses, schools, individuals and government officials to acquaint them with Morocco and the opportunities there. Harry has also promoted Morocco with a great deal of success through appearances on radio and television programs. His message is consistent: the friendship and long time political relationship between our two countries runs deep and true. He stays involved and close to the Moroccan people who live and work in this area. In the past he has worked with the Diplomatic Ball, the International Relations Council and International Visitors Council. For the past twenty years he has served as the Secretary General of the Greater Kansas City Consular Corps and is currently the Vice Dean. In October of 2009 Harry received the Ouissam Alaouite Medal, the highest civilian award, bestowed by His Majesty, Mohammed VI, King of Morocco.

Permanent link to this article: http://kcconsuls.org/morocco/